The history of Facet begins in 1946, in the laboratory in which Francesco Andriano manufactures, with a small group of collaborators, tungsten contacts.
It is a story of dedication, skill, courage to do and to innovate:  strong values on which the company is still based today, thanks to the guidance of the Andriano family, who knew how to transform a small artisan shop in an international company. 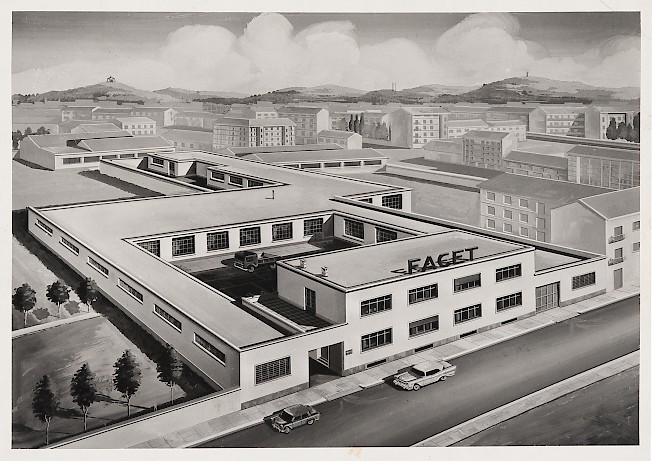 Origins: from telephony to the automotive industry

Italy was just leaving behind the tragic events of World War II, when Francesco Andriano founds with his son Mario F. A. C. E. T. - The Electrical Contacts Equipment Factory of Turin. It is a small company, which produces tungsten contacts for the telephony industry, a potential market with a rapid growth, but very soon the vocation of Facet changes. The materials used and processing technologies allows it to enter into another area, which soon experiences an extraordinary development: the car industry. The intuition of the founder on the potential of tungsten defines the future of Facet. Until 1961, the company produces therefore plated contacts for ignition systems, mainly intended for the motorbike and car industry, as a supplier of original parts.

The Sixties: new products and the dawn of globalisation

In 1961 the reference selection is enlarged with the production of condensers.  The caps and rotors follow in 1966. The trait that sets the company apart even today begins to manifest itself: the permanent research, attention to the needs of a market that demands innovation, expertise, and technologies.
In 1961 Facet publishes its first catalogue, which presents technical drawings and product characteristics. Even today, the clear, complete and up to date catalogues are one of the company's crown jewels.
At the end of the decade, Facet - now led by the founder's sons, Mario, Giovanni and Guido - enters on the European markets. Exports abroad are still modest, but the trend is clear: listen to the demands of the market and implement them rapidly, by introducing new products represent the key to expanding the business horizons.

The great changes of the Seventies

Facet moves to Collegno, just outside Turin, in the former premises of Leumann cotton mill, which was experiencing a serious crisis. The transfer to this location involves a major commitment for the company: it absorbs part of the cotton mill's workforce, offering an employment opportunity to those who had just gone through the difficult experience of dismissal.
The decisive transformation takes place: from direct supplies to manufacturers, the company goes to serve the replacement market, allowing it to diversify its client base.
Guido and Mario lose in the same year the presence and the precious collaboration of their brother Giovanni, who died prematurely.

The Eighties: CAD, electro-mechanics and automation

The demands of large customers push Facet to make a strong commitment to achieve high standards of quality. The introduction of CAD tools makes the process of product design faster and more accurate, even though - with the arrival of electro-mechanics - products are increasingly complex and require new skills and processes.
The automation, which allows the standardization and increase speed of processes, is introduced in the company at the end of the decade, on the production lines and with the creation of the first automated warehouse in 1987.
The United States represent an important market in this period: 25% of sales volume come from sales of spare parts for European and Japanese cars in this country.
It is also the period in which the third generation enters in the company, with the arrival of Vito Andriano, Mario's son, initially in production and later in the administrative department.

The Nineties, between electronics and renovations

The decade is particularly intense:  the productive transformations, linked to the arrival of electronics, are interwoven with the works to renovate the premises of the company. Between 1993 and 1994, the plant is reorganised and fully restored. The logistics area is also extended with a second automated warehouse and, in 1995, a clean room is set up for the manufacture of electronic components. At the same time, the long, delicate and challenging process to obtain the ANFIA (IATF member) quality certification begins and the certificate is awarded after one year of efforts.
Among the important aspects of this period are the changes at the organizational level, with the introduction of a new ERP system, which makes the processes more repeatable and controllable.

The new millennium: the pursuit of total quality

In the years 2000, the efforts to create a production chain which can be controlled in every way possible are intensified: in 2004 the quality of Facet processes is also recognised being certified according to the ISO / TS 16949 standard.
Then, in October 2005, the environmental certification UNI EN ISO 14001 and, in 2011, the safety certification OHSAS 18001 were obtained.
In 2009 the process of permanent development of human resources begins, with the start of training initiatives, collaboration and internal communication.
In 2013, Facet's willingness to recognize its clients’ needs pushes it to adopt an advanced CRM system.
Even the design and logistics make a step further, with the introduction of a centralized project management system (EPM) and the opening of a new logistics centre in Orbassano - Turin, in the summer of 2014.
With the contribution of Mauro and Daniele Andriano, the sons of Guido, the company is moving towards a better planned and more modern management.